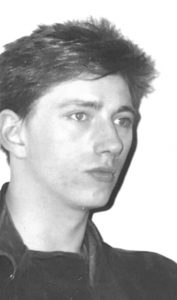 He released some demo tapes with his songs “Devil Dance” and “Love is a kind of mystery”, which was played by local DJs in his city’s clubs.
In 1985 he signed his first record deal on the label “Last Chance Records”.

After a few months under this constellation, Marion Küchenmeister (vocals) joined the band as the fourth member.
The first two records immediately had a supraregional scene success and Invisible Limits went on a big live tour.

In 1987, Thomas Lüdke decided to pause his active membership in the band.
He first took care of his second music project “The Invincible Spirit”

The other members continued with changing musicians and had many successes in Spanish-speaking countries.
In 2005, the band gave their last concert in Germany at the Bochum club “Zwischenfall”
and in 2008 a farewell concert, for the Spanish fans.
Both concerts were performed in the original line-up of 1985 and the band was supported by some guest musicians.

In 2009, Invisible Limits announced their final resolution.
This was underlined, with the CD release: “The Final Album”.

Thomas Lüdke took over the first Invisible Limits Songs, into the live program of his project “The Invincible Spirit” and continues the work until today.

Marion Küchenmeister dedicated herself to numerous other music projects.
Andreas and Ralf gave up their musical work until further notice.

INVISIBLE LIMITS is a DPMA registered Trademark of Thomas Lüdke.